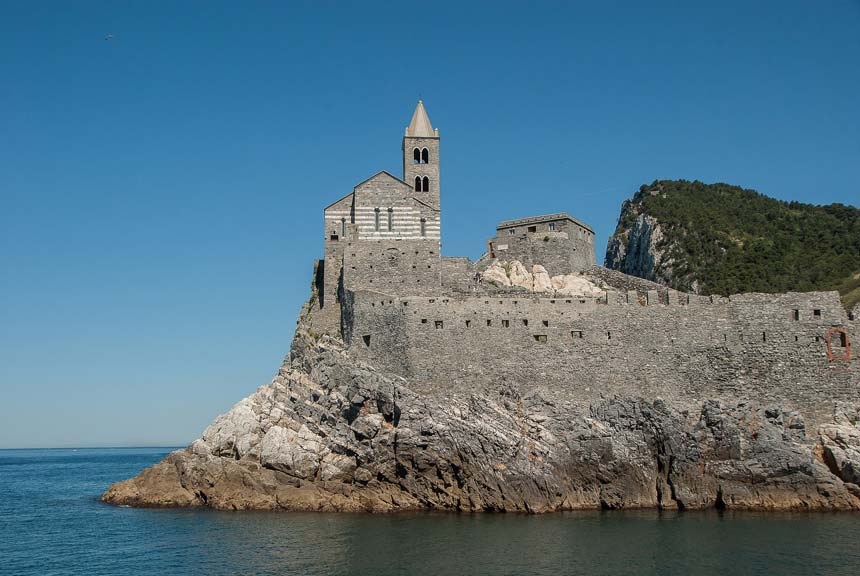 The village of Porto Venere is located on the tip of the promontory that marks the access to the Gulf of La Spezia and can be reached by car, from La Villetta Hotel, passing through La Spezia, crossing “Viale Niccolò Fieschi” and the villages of Marola, Cadimare, Fezzano and Le Grazie, the journey time is approximately 42 min. It can also be reached by ferry from the Piers of Lerici and La Spezia or by bus. Porto Venere is also known for the extraction of the precious “Portoro” or "black marble", the black gold of this graceful hamlet. The seaside resort developed around the picturesque village of probable Roman origin (Portus Veneris) in front of the Palmaria Island. Inside the medieval village, the tall colorful buildings and the famous tower houses dominate the “Calata Doria”, the small harbor. Behind the baroque bell tower of the Romanesque Church of San Lorenzo stands the profile of the Genoese Citadel (13th-16th century): from its ramparts, you will enjoy a superb panorama. In the Church of San Lorenzo of 1130 you will find works from the Tuscan Renaissance school, a marble altarpiece attributed to “Mino da Fiesole”, a White Madonna of the XIV century, a triptych of the XV century, a collection of Byzantine ivories and a treasure with Arab-Phoenician and Byzantine objects. On the coast, in a small inlet, lies the “Arpaia Cave”, known as the "Byron Cave": legend has it that Byron loved to take refuge in this place and swim from here to Lerici. On the westernmost tip of this promontory, the Gothic style Church of San Pietro, built in 1277 on the remains of a pagan temple of the 6th century, bursts in all its solitary beauty: enjoy a beautiful view from its terrace!

In front of Porto Venere: the Palmaria Island with the “Gotta Azzurra”, splendid beaches and paths, of great naturalistic interest, is the largest in this archipelago; the Tino Island with the remains of the Monastery of San Venerio and the Tinetto one, an Islet where some ruins are visible, ancient evidence of the presence of the monks. The Palmaria Island can be reached from the Porto Venere Pier by ferries that carry out the Tour of the Islands with a stop on the Palamaria Island. The Tino, now a military area, and the Tinetto are bypassable, always with line boats, in the summer. To see: the medieval gate of access to the historic center of 1133, the historic center of the village with its "caruggi", the Doria Castle of the sixteenth century, from the terrace above you will admire a magnificent 360 ° view and the suggestive cemetery below the Castle. Finally, I recommend taking the promenade which, from the locality " Le Bocche", the arm of the sea in front of the Church of San Pietro which separates the Promontory from the Palmaria Island, leads to "Le Terrazze" bathing establishment.